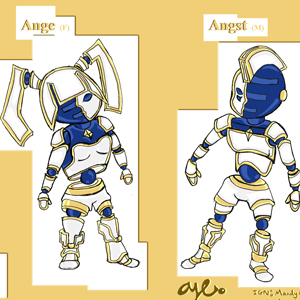 Concept: Battle Ange & Battle Angst are androids from the future, where they appeared in maple world to provide support for strong warriors. i.e. android shop, no exp loss at death, revival at current map with restored mana and health, & buff freezer. They are bots finished with pearl-like armor, that remain unscathe in battle. Like other androids, the two bots receive life from pearl hearts that shares its energy with the warriors (Can be scrolled for attack / magic attack points).