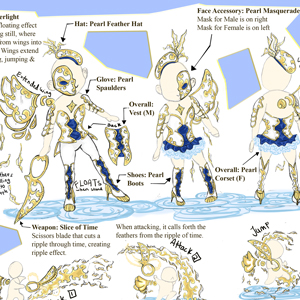 08 Ripple In Time by MandyMiko

Concept: Half-man-half-machine beings of the future are transported through a ripple in time. They stay connected to their time by slicing ripples with the scissors blade. As a result, powers beyond the present is summoned, with a force that brings out the feathers that fell through time. The future beings from the ripples float like their featherlight with their advanced flight technology. Feathers representing their weightlessness falls through the ripple, which is forced out when powers are summoned from the ripples when the beings slice through time.

Set Name: Ripple in Time
Weapon: Slice of Time - Scissors blade that cuts a ripple through time, creating ripple effect. When attacking, it calls forth the feathers from the ripple of time. Other half of the scissors blade reveals itself when there is a ripple in time.
Gloves: Pearl Spaulders
Shoes: Pearl Boots
Cape: Featherlight - Comes with floating effect when standing still, where feathers fall from wings into a ripple below. Wings extend when jumping, attacking & floating. They contract when not in used while walking. Creates feather falling effect.
Hat: Pearl Feather Hat
Face Accessory: Pearl Masquerade
Female Overall: Pearl Corset (F)
Male Overall: Pearl Vest (M)